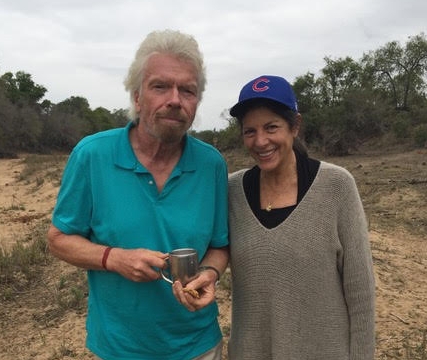 Debra on safari with Richard Branson  (she loves her Chicago Cubs)

I don’t get irked very easily but you know when I do?  When people roll their eyes upon discovering that I love college and professional sports.  I think I really confuse them when someone they see as a “spiritual leader” actually cares who wins the World Series or the NBA Championship.  It appears that many or maybe most of my colleagues and clients are somehow disappointed that I could be so captivated with such a seemingly superficial aspect of creation—especially given the state of the world.

Although I feel no need to justify my love of the Chicago Cubs, Bulls and even da Bears, I will tell you why I love sports in general:

1.  Sports inspire us. When we see some kid from the Bronx with little hope of crawling out of poverty hit the home run that makes his team the world champions and all the team members run on the field and jump on top of him like a pile of puppies, I don’t know about you, but it inspires me to do greater things in my own life.

2. Sports allow us to feel empathy. When it’s your home team whose players are running towards that kid and jumping with uncontainable joy landing in the big man pile, you feel indescribable elation yourself. And if your team is the one whose players are sitting in shock peering out through the metal of the fence around the dugout with tears streaming down their faces, your heart breaks along with theirs.

3.  Sports give us a glimpse of the best in each other. I just heard a story on the news about a kid named Zach in Iowa who was about to finish ahead of the pack in his state cross-country meet when he went to the aid of a runner who had collapsed. Although he still ended up finishing the race in a qualifying position, he was told he was disqualified because Iowa state athletic rules say no runner can help another. When asked about his disappointment he said, “If I could do it all again I wouldn’t change a thing. I did what I felt was right.” 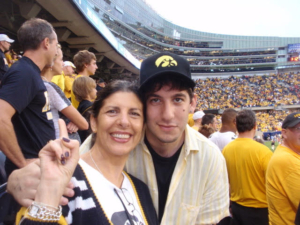 Debra and her son Daniel cheering on their Iowa Hawkeyes

4.  Sports let us feel like a winner. Even when we don’t have one ounce of athleticism anywhere in our being, we can still be a winner. When our team triumphs, we parade through the streets wearing our team’s cap as proudly as if we were the one who shot the winning basket or caught the final touchdown pass. Long after the confetti has been swept up, we still puff up our chests as we wear our teams jersey and proudly tell everyone who wants to listen to us, that we were even at the parade.

5.  Sports let us connect with others in profound camaraderie. The bonds that result from sharing your teams sporting event transcend gender, race, age, socioeconomic background, political differences and more. Where else can you be surrounded by total strangers who within minutes you’re high-fiving and hugging like you’ve known each other for years?

6.  Sports allow us to have a spiritual experience without having to admit that we’re spiritual. Ken Reed, author of How We Can Save Sports, likens sports to a spiritual experience. He says that athletes, when they are “in the zone,” convey a sense of ecstasy, confidence, and oneness with the universe, and we, as spectators, get to experience that contact high. Furthermore, brain research has shown that we get “lit up” equally as much when we celebrate another’s success as when we win ourselves.

The Myth of Perfection 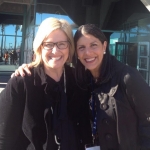